Memories of Meadowbank – by Crazylegs

Cold, grey and pretty much falling apart.  It may not look like a palace of dreams, but this city centre sports centre has, for the last nine years, been filled with the most intense of emotions and exertions for Auld Reekie; first game nerves with shaking legs and dry mouths, the elated wins,  the dashed hopes, proud parents, adoring kids, the cheers, the tears and the ever present circle of friendly high fives.  The 3rd of December will mark the closure and demolition of Meadowbank as we know it, and the start of major redevelopment plans to create a new state-of-the-art sports centre. 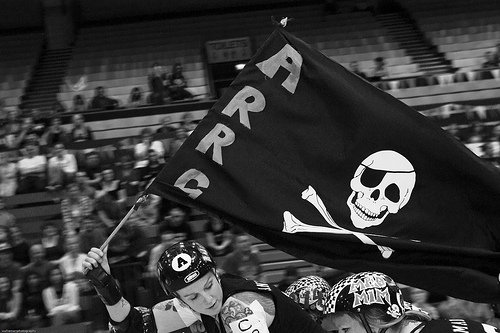 Opened by Prince Edward, Duke of Kent on 2 May 1970, Meadowbank was the first stadium ever to host two Commonwealth Games (1970 and 1986), but more importantly, it was also the site of the first public Roller Derby bout in Edinburgh – Fishnet Burns – in January 2009.  Since then, Auld Reekie have made it our home venue, and hosted almost 100 games, boot camps and events there.

Hundreds of spectators experienced their first taste of roller derby in this building and thousands of people from around the globe have skated, officiated, DJ’d, announced, and volunteered in the huge, and familiar Hall 1 at Meadowbank.   It took a wee while to convince the Management at Meadowbank that our sport was legit, and our wheels wouldn’t damage the floor but finally they acquiesced and a beautiful and long standing relationship was formed.  Here are a few of our favourite memories from our times at the hallowed Hall 1.

As was usual in 2009, we were short of skaters to make up two teams for our first home game, ‘Fishnet Burns Night’, so filled the gaps with guest skaters from London Rollergirls ‘ London Brawling’ team. Stef Mainey, Grievous Bodily Charm and Sinister Mary Clarence to name a few, gamely donned some tartan and chains (themes were the vogue) to skate for the Highland Heathens and Celtic Chaos and our first ever Home Teams were born.  Our Brawling guests helpfully pointed that we’d underestimated the hall size required for a full track and a short safety panic ensued, about the closeness of the track to the wall – to be resolved by the staff at Meadowbank supplying a pile of crash mats that we  duct taped to the walls! High tech safety feature in place, the game could go on! Fishnet Burns was the first outing of Celtic Chaos and Highland Heathens, and the first (and last) Auld Reekie game ever to be played in Hall 2 at Meadowbank was a success!

Following their debut, our team went from strength to strength, and played game after exciting game in the cavernous Hall 1 and as we grew, the number of teams and games exploded until we were hosting European teams, doubleheaders, and tournaments and boot camps. With each game came a new poster theme a new skate out song, and a new result. Half time entertainment went wild with pipers, drummers, choirs, jousting on giant space hoppers, audience races, egg and spoons, conga lines, chuck a duck, and so many more. Bonnie Burrito and the bARRG became a must for avid game goers and nothing could raise the heckles and bring a tear to our eyes more than hearing the familiar ‘Auld Reekie You’re so Fine’ chat combined with much clapping and stamping in the bleachers in support of our teams battling it out on track. 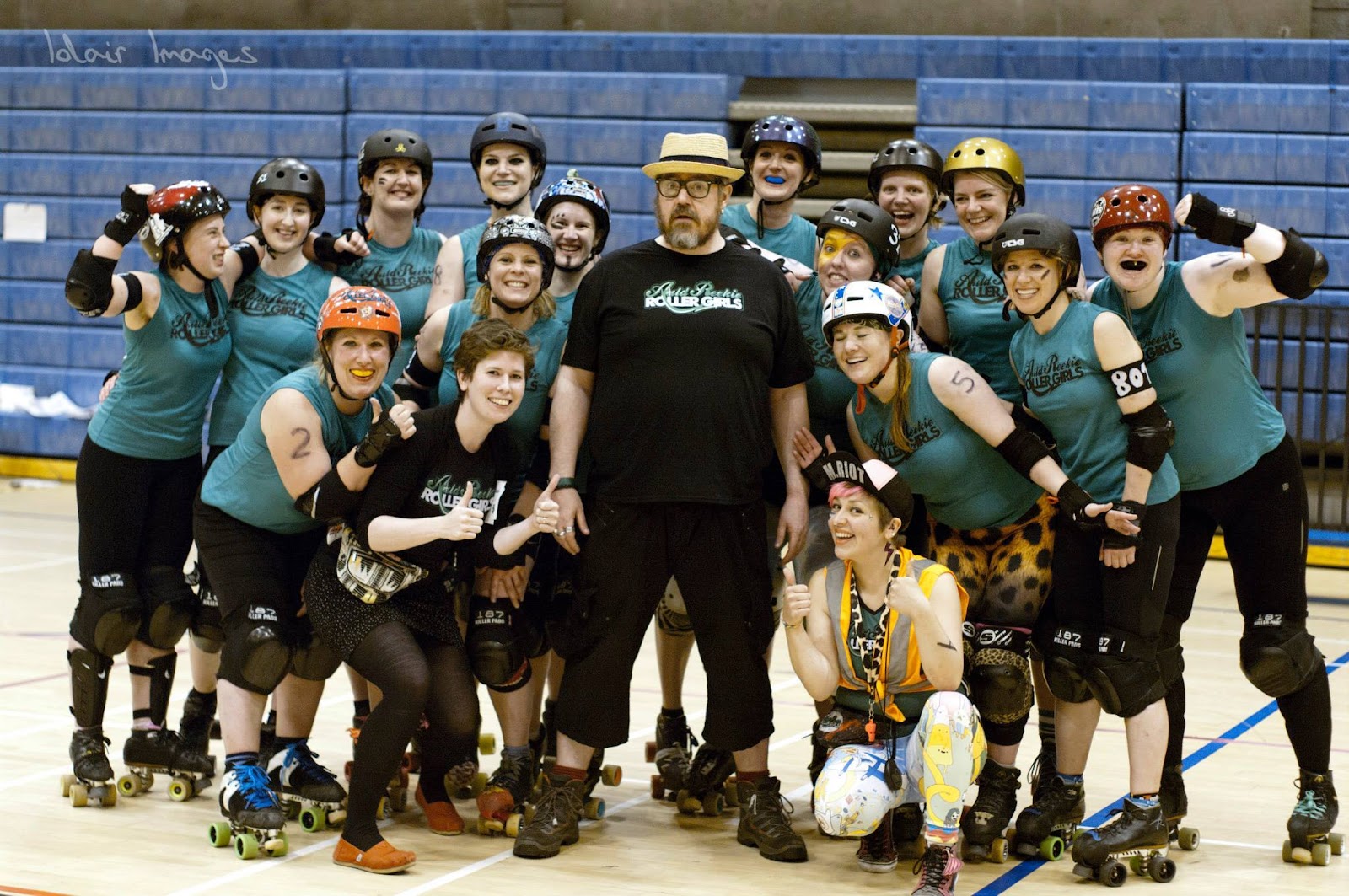 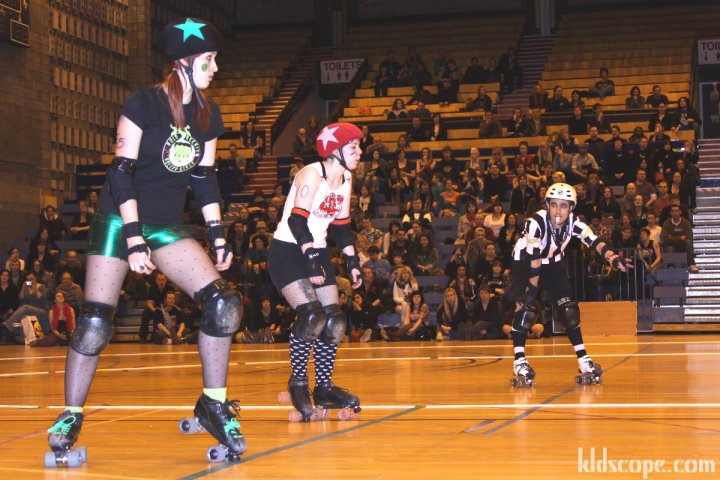 After expanding our Home Season teams from two to three and rebranding them, Home Seasons at Meadowbank always created a huge buzz for our league and filled the hall to the brim with friends and family all fired up and ready to cheer the Cherry Bomber under dogs as was tradition.  Home Team themes and identities changed with the rosters over the years and planning the skate out took as much time as learning the game strategies; highlights include the cool and confident Cherry Bombers bursting through a huge sheet of paper held across the track, the Leithal Weapons epic Titanic themed intro complete with cardboard waves, and a majestic Jack and Rose and of course, the Skatefast Club brimming with 80’s attitude entering the hall through billows (thin wisps) of dry ice and awkwardly throwing sweets into the audience. Hands down the most exciting moment in Home Season history was the 2014 season final, when SFC jammer Kiki pulled out a tear inducing, heroic 1 point, last jam win over the reigning Home Season Champs Leithal Weapons. 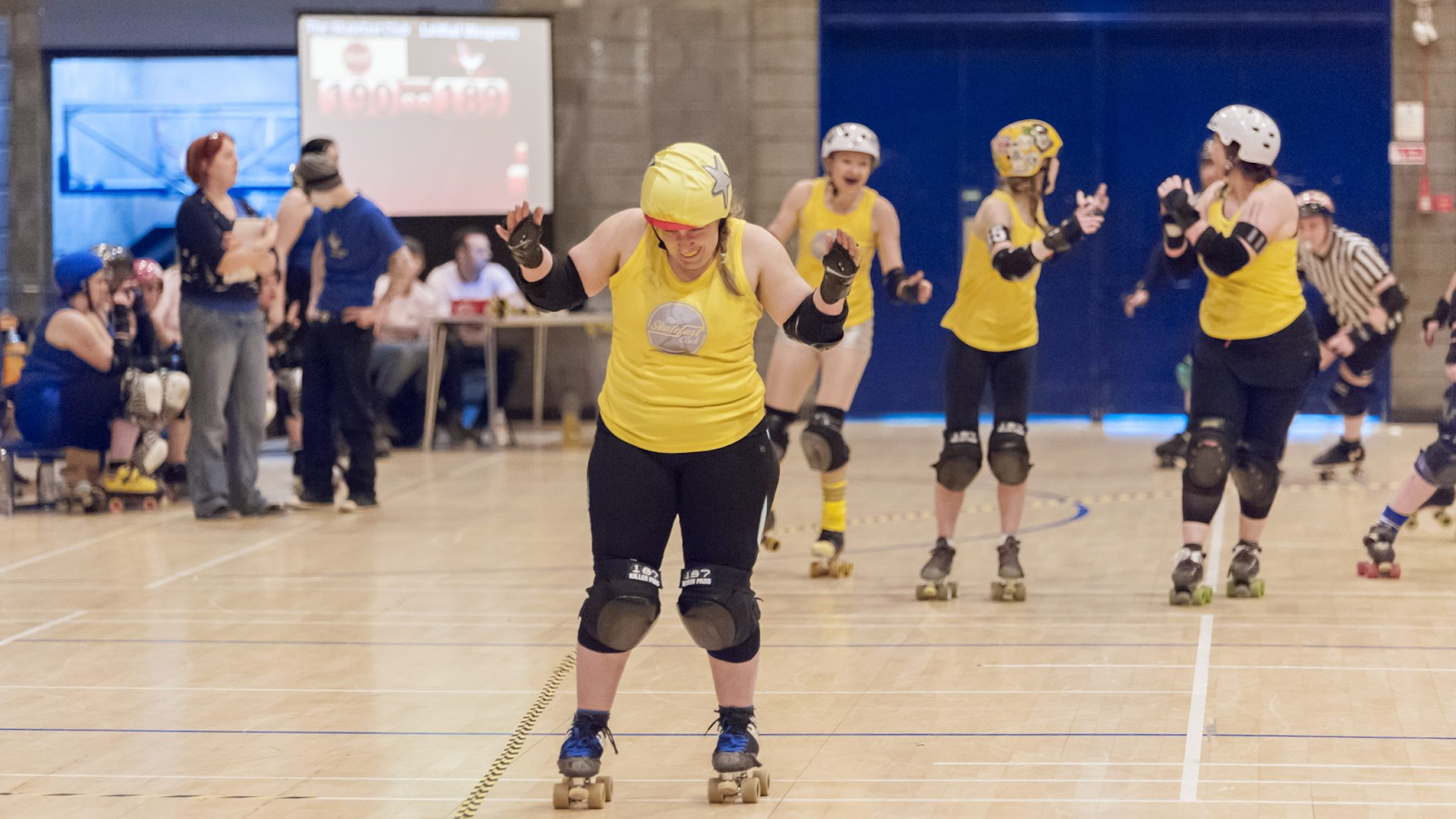 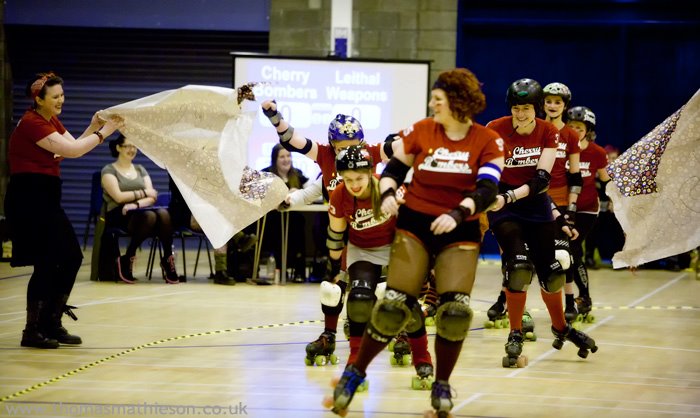 As our All Star team rose through the rankings, we used the halls and classrooms of Meadowbank to share our knowledge off skates and on, at the annual School of ARRG knocks -the boot camp of all boot camps.  For these, we took the ARRG quirkiness and just like our relentless use of a pun, we took it as far as we could push it.  Not content with hosting 60 skaters of different levels from all over Europe, we wanted to bring something extra, we had a Headmistress, classroom assistants, a school bell, school photographer, packed lunches and even a designated janitor to repair track and clean up spills – everyone dressed up and it was hilarious.  The year 2012 birthed the legendary School of ARRG Knocks warm up, to be bettered every year with Fame themed workouts, boyband dance routines (SOAK 5ive) to an elaborate weapons selecting cornucopia based HungARRG Games themed warm up.  Every boot camp should begin with absolute hilarity, we’ve loved every minute of delivering ours.

May 2015 saw us host our first British Champs Tier 1 tournament, and a determination to make it the biggest and the best atmosphere ever; we decked out Meadowbank in endless amounts of bunting, and posters, we baked more cakes than anyone should see in a lifetime, and we had the biggest crowd ever seen at any Scottish Roller Derby event – the bleachers were full, the noise was unbelievable, and for the first time ever, we had a Bar (or a bARRG)….the Glasgow/Edinburgh friendly rivalry, manifested through loud singing and chants and fueled with drink was a sight to behold. Sadly we lost that day to Glasgow, but we took the win over Rainy City and secured our first ever silver medal! 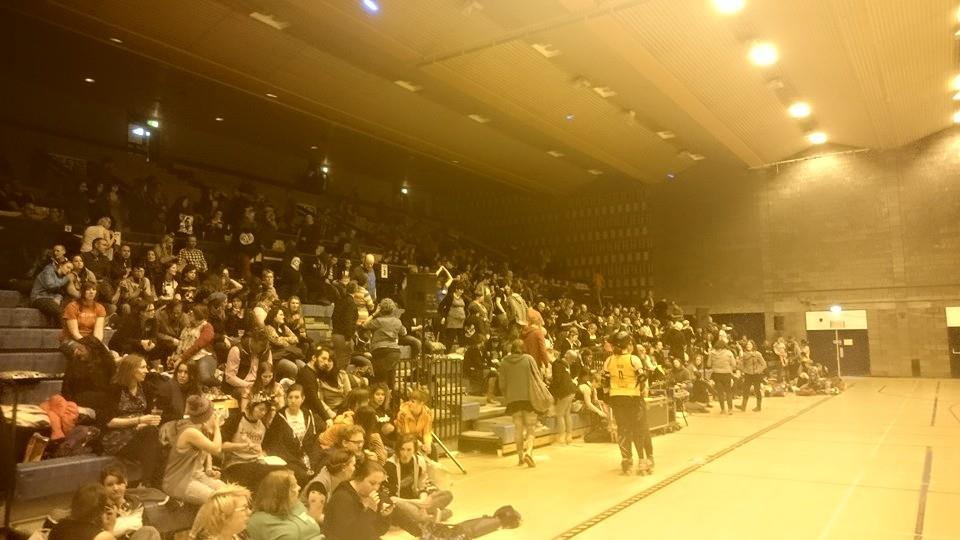 Our new C Team, the ASTROS (All Star Rookies), came into play for 2016 and it also saw our relationship with the Meadowbank staff tested to the max as we decided to pull in the crowds by grabbing some giant brightly coloured chalks and drawing all over the pavements outside, inviting people to ‘COME WATCH LIVE ROLLER DERBY!!’  Unbeknownst to us, there was a very official fireworks event at Meadowbank planned for that evening, and the duty manager was understandably upset about the state of their frontage. After profusely apologising and spending forever washing the chalk off with buckets of soapy water, imagine our delight when it started to rain so heavily that the fireworks display was eventually called off as well… 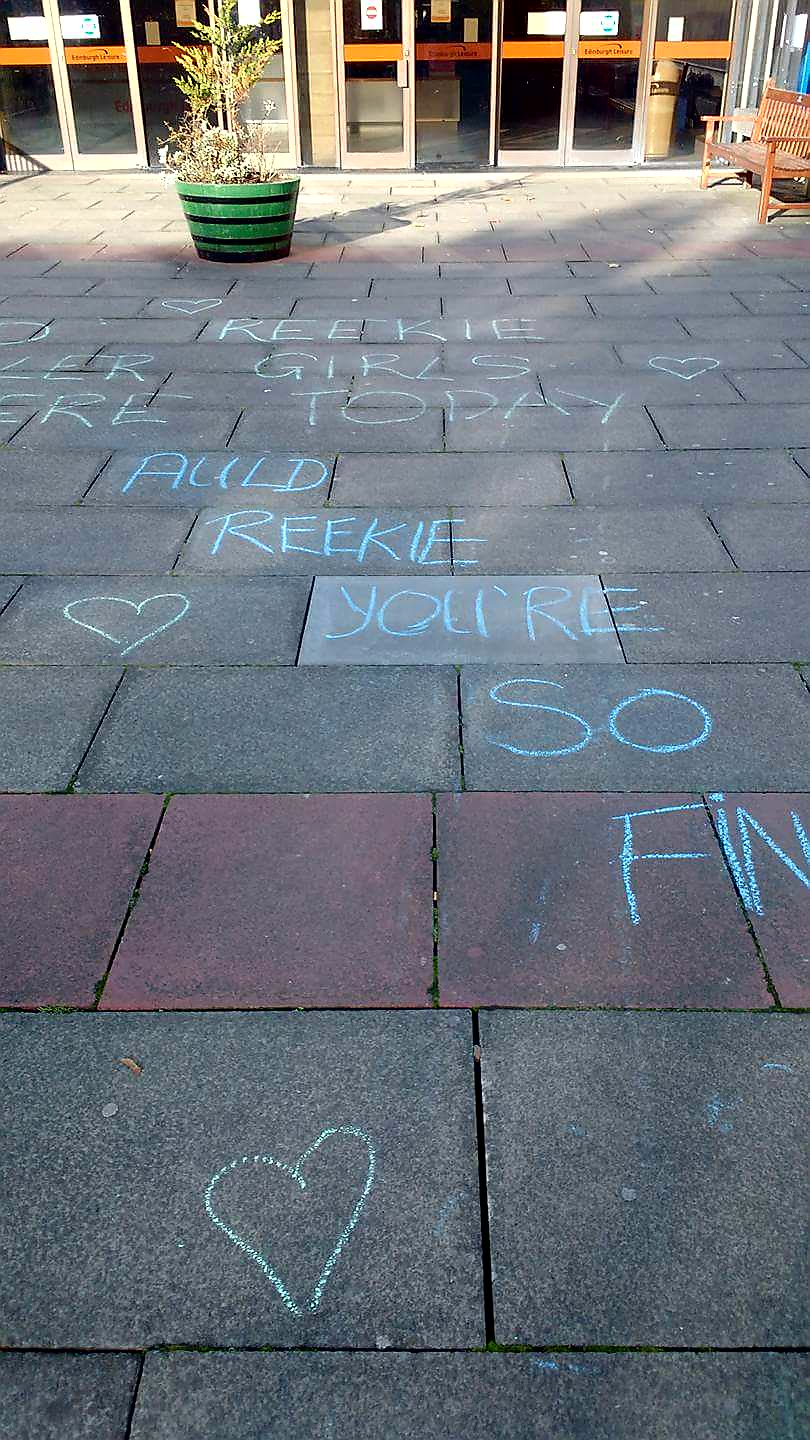 Hands down our most cherished memories are full of chilled out times with our team-mates in the gigantic ‘home’ changing room, when one by one, we gathered on game day – focused, nervous, happy, determined.  Carrying out familiar activities, chattering with nervous energy, chilling out with headphones on, fastidiously laying out equipment and checking lists over and over again.  The changing room became a place for bonding, meditation, visualisation, strategic talks and inspirational speeches; we wrote down our fears and hopes and dreams.  We shouted our values and celebrated our strengths and we dared to dream of triumphs and success, but most importantly, we knew that as long as we had each other we could take on the world. 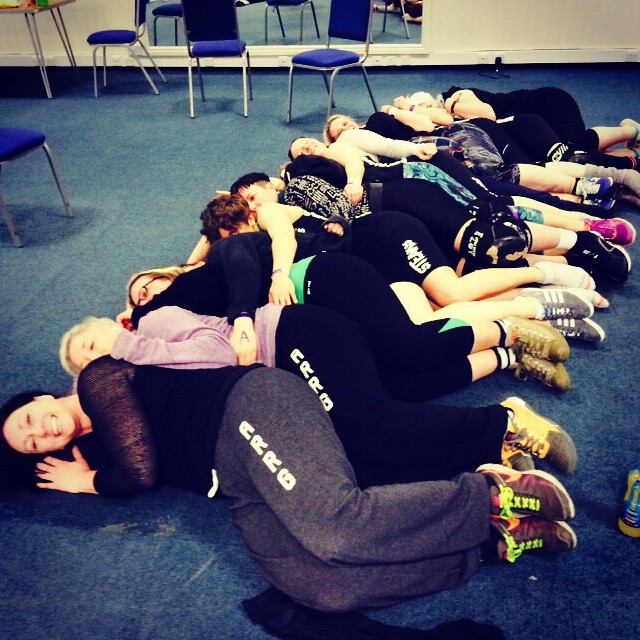 At some point, over the next few months, the walls will get torn down and the roof will crumple and our  beautiful wooden floor will be gone.  It’s the end of an era and our future is uncertain as we continue with our search to find a venue available for us to host home games.  Meadowbank, we will miss you – thanks for an amazing decade.